Ancient Greece-birthplace of democracy, philosophy, history and theater. And also a society in which same-sex relations lay at the center of social and political life. The remains of ancient Greece fascinate us still today, and in its art and ruins we can trace the origins of Western culture and the beginnings of gay and lesbian history. On this tour we will return to our roots-both as heirs of the glorious tradition that is Western civilization, and as gay men and women who recognize ourselves in the Greek past. And as always with Oscar Wilde Tours, we’ll do it in style! With splendid hotels, superb dining in some of Greece’s finest restaurants, and expert guides to lead us every step of the way. This is truly an enchanting journey that will create memories for a lifetime.

accommodations
ELECTRA PALACE
Recently renovated, the Electra Palace is a gracious, older hotel that offers superb up-to-date amenities. It is on a quiet street, but 2 minutes walk from the heart of modern Athens’ central shopping district and under 10 to the Acropolis-a perfect location, not to speak of the breathtaking views from the rooftop!

DAY 1 – After time to rest following your flight, Professor Lear takes you on a walk through the center of Athens. We get our first glimpse of the Acropolis, with its glorious temples and dramatic setting-as well as of the Agora below. Gay history is all around us: we see the llissos-the river where Socrates discourses on male-male love in Plato’s dialogues; the remains of the vast temple built by the Roman Emperor Hadrian (the first great fan of Greek homosexuality); the statue of Lord Byron, the bisexual English rake whose heroic death dramatized the Greek revolution against the Ottoman Empire; and several other sights that underscore the gay theme that runs through ancient Greek history. After a fascinating lecture on same-sex love in ancient Greece, it’s time to eat! We celebrate the beginning of our tour with a delicious meal of traditional Greek food, at a roof-top restaurant with a splendid view of the illuminated Acropolis. 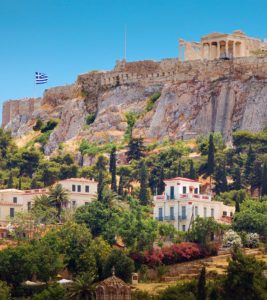 DAY 2 – Today we spend the morning exploring the Acropolis with our archaeologist guide: first the hilltop itself and then the excellent new museum at its base. After a lovely lunch in the museum’s neighborhood, we continue our exploration of the heart of the ancient city, visiting the Agora, which served as the city’s central marketplace and the Kerameikos, or main cemetery, where Pericles delivered his immortal funeral oration. We learn about the glory of classical Athens, while focusing on the central role of same-sex relations in Athenian culture: in particular, we learn about Harmodius and Aristogeiton, the gay couple that served as Ancient Athens’ Uncle Sam. This evening is free for your own explorations of our hotel’s neighborhood-the Plaka, the heart of historic Athens.

DAY 3 – Today we take a trip out of Athens to explore the fascinating sights of the northern Peloponnese, just across the Corinthian Gulf. Our first stop is at Nemea, the site of one of the ancient Greek world’s four great athletic competitions. Less well known than Olympia, Nemea is of special interest to us for the astonishing homoerotic graffiti from 2500 years ago preserved on its walls. After lunch we visit the mysterious ruins of Mycenae, center of the world of the Iliad-where we will discuss the fascinating relationship of the hero Achilles and his friend (and possibly lover) Patroclus. Finally, we visit the world’s best-preserved ancient theater, in nearby Epidauros, before returning to Athens for a free evening.

DAY 5 – Today we make a second day excursion, to visit another one of Greece’s most famous sites, the vast temple complex of Delphi. Here the ancients came to consult the oracles of Apollo, which they received from the ravings of a drugged priestess. We take a thorough look at the vast site and the museum, and pay special attention to the cult statue of the divine Antinous, the emperor Hadrian’s deified lover-and pagan competitor for Jesus Christ! Statues of Antinous have been found throughout the Greco-Roman world, but as we will see, the statue in Delphi seems to have been worshipped with special zeal. Lunch is included en route. On our way back to Athens, we stop at a rarely visited site that is rich in gay history: the lion monument of Chaironeia. Built to commemorate the Sacred Band, the crack regiment of later classical Greece, the monument honors a warrior unit composed exclusively of lover/beloved couples. We return to Athens for a final free evening. 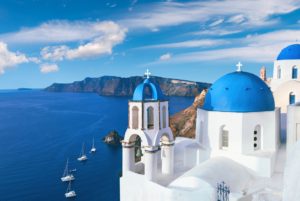 DAYS 6 – 7 We take an early morning ferry across the Aegean for lovely views of the Cycladic islands, landing in Santorini before lunch. We spend two days exploring this ravishing island, curved around the bay created in prehistoric times by a sunken volcanic caldera. We visit Akrotiri, the Minoan city that may have inspired the Atlantis legend  as well as the island’s charming “modern” villages and beaches, especially Oia, the sparkling white village famous for its sunsets over the caldera and the donkeys that form its traditional transport system. Lunch will be included on both days as we explore the island; evenings will be free for relaxed dinners.

accommodations
MYCONIAN KORALI HOTEL
The Myconian Korali Hotel is just outside the town of Mykonos, perched on a hillside with a ravishing view of the sea and Mykonos’s famous windmills. Enjoy the pool, the terrace, the exquisite cocktails…. 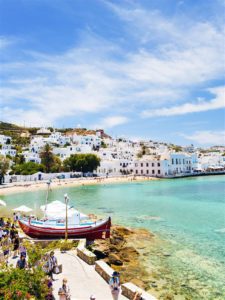 DAYS 8 -9 – A short two-hour ferry ride takes us to Mykonos, perhaps the loveliest of the Greek islands, famous for its beautiful white village, its turquoise sea, its beaches-and its gay nightlife. We visit Mykonos town (including its archaeological museum, with some explicitly sexy images from ancient times) and we also spend a full morning on the nearby island of Delos, the Greek Pompeii, with its amazingly well-preserved ancient city-including the famous row of phalluses in front of the temple of Bacchus! We will have lunch together on Day 8 when we arrive, and on Day 9, we will have one last lovely Greek seafood dinner to toast our new friends, this beautiful country, and its amazing gay past!

DAY 10 – Our tour ends with breakfast this morning, but let us know if we can help with your flight arrangements or further travel plans.