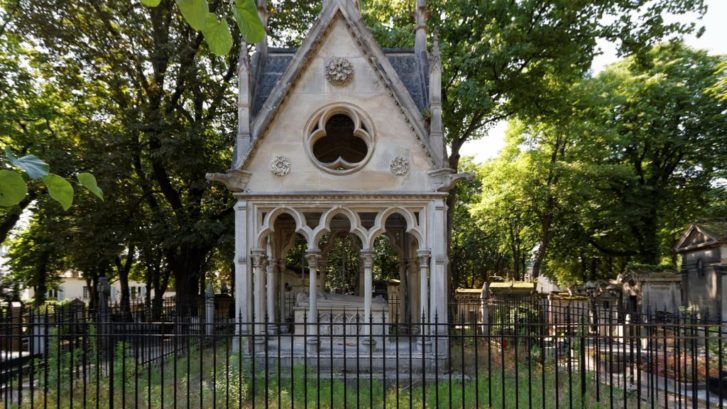 Paris is one of the world’s great LGBTQ history cities—and Père Lachaise cemetery is possibly Paris’s richest LGBTQ history site!  How did it get that way?  Père Lachaise was the first garden cemetery—a trend in the 19th century that led to the creation of London’s so-called Magnificent Seven, New York’s Green-wood, and Boston’s Mount Auburn.  The garden cemeteries were meant as a kind of public park, and one of the attractions was to be the famous people buried there.

The founders of Père Lachaise started this off by moving some famous tombs to the new cemetery.  You see one of them above.  This is the tomb of the iconic romantic couple of the Middle Ages, the theologian Abélard and his abbess wife Héloïse.  This idea worked out well.  Père Lachaise is in fact a hugely popular tourist destination—the most visited cemetery in the world.  And the attraction is its famous ‘residents’, including such luminaries as Chopin, Rossini, and Jim Morrison.  LGBTQ celebrities are particularly prominent.  Oscar Wilde’s tomb is the most visited in the cemetery, and other famous residents from Paris’s LGBTQ history include Marcel Proust, Gertrude Stein, and Colette.

Here are three of my favorite LGBTQ history spots in the cemetery.  I will let you follow the tourist map to Oscar Wilde’s tomb on your own.  I only hope you will stop to say a prayer for his first lover and life-long friend Robbie Ross, who arranged for the tomb to be built and was himself buried in a niche in it.

But no tourist map will direct you to the joint tomb 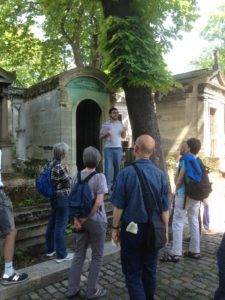 of Pierre Augereau and Louis Le Moine.  Augereau and Le Moine were two of Napoleon’s generals.  They are buried together, under an inscription reading “Death separated them, now death reunites them.”  Were they a gay couple?  We cannot know.  Although Augereau got married twice, however, he is not buried with either wife.  And Le Moine, who died at 85, was never married.  It’s hard to guess how they ended up buried together.  There were however relatively modern gay people in Napoleon’s France.  One, for instance, is Jean-Jacques-Régis de Cambacérès, who is buried close by.  It isn’t certain, but Cambacérès may have been responsible for France legalizing same-sex relations between consenting adults in 1794—a little before the USA!  In any case, it’s a great example of the complications of LGBTQ history:  we have to guess at a lot of things, because much of the evidence for our history was not preserved.

There is slightly less mystery about our next stop.  This is the tomb of the most successful woman painter in mid-19th century France, Rosa Bonheur.  Bonheur is not famous today.  In the mid-19th century, however, before the turn towards abstraction in art that started with the Impressionists, she was a huge star.  For example, the Metropolitan Museum of Art in New York has a huge painting of a Horse Fair by Bonheur.  For this painting, Cornelius Vanderbilt II paid USD 80,000—about a third of the price of constructing the museum itself.

Bonheur was one of the those 19th century women who lived in a household with another woman.  Today we call this 19th century arrangement a ‘Boston marriage.’  Again, it’s hard to say whether these relationships were romantic/sexual, either in general or in many specific cases.  But we know they sometimes were.  And in any case, Bonheur also cross-dressed.  Thus, if we can use categories from today’s 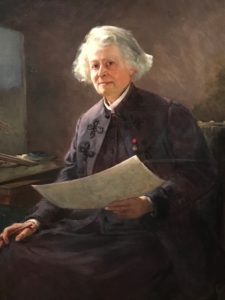 view of gender and sexuality in discussing 19th century people, she may have been both a lesbian and trans.  Or perhaps she was (also?) intersex:  we would after all have no way of knowing.  In any case, we are probably justified in using the contemporary term ‘gender-queer’ for her.

Bonheur spent her adult life in two Boston marriages, the first with a woman called Nathalie Ducas, the second (after Ducas’s death) with an American painter called Anna Klumpke.  I will give you two images here.  One is a portrait of the elderly but still markedly gender-ambiguous Bonheur, painted by Klumpke.  The second is their tomb, or rather the Ducas family tomb, in which Nathalie is buried, but also Rosa and Anna both! 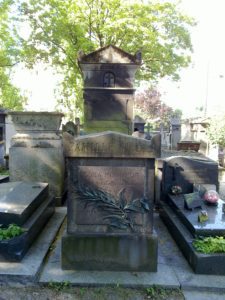 Finally, right by the cemetery’s main entrance is the tomb of Colette.  Colette (the subject of two recent English-language movies) is probably France’s best-known woman author.  She is very different from the famous English-language woman authors, because she wrote about much more scandalous topics.  One of her favorite themes was lesbianism—particularly prominent in her early Claudine novels, which are still very popular in France.  Another is high-class courtesans, who are the subject of her novel Chéri and her novella Gigi, from which 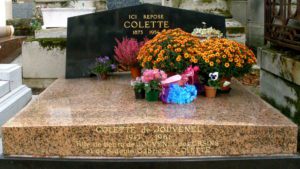 Colette herself had a scandalous life, although a lot of it revolved around heterosexual relationships.  She created her biggest scandal, however, in 1907, when she was having an affair with cross-dressing aristocrat Mathilde de Morny—generally known as Max or uncle Max.  Colette and Max kissed on stage during a vaudeville performance at the Moulin Rouge.  I am giving you a photo of 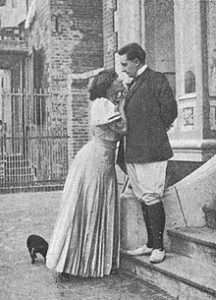 Colette’s tomb, and also a historic photo of Colette and de Morny.

(and also catch Oscar Wilde Tours’s Zoom tour of the cemetery the next time we give it!)