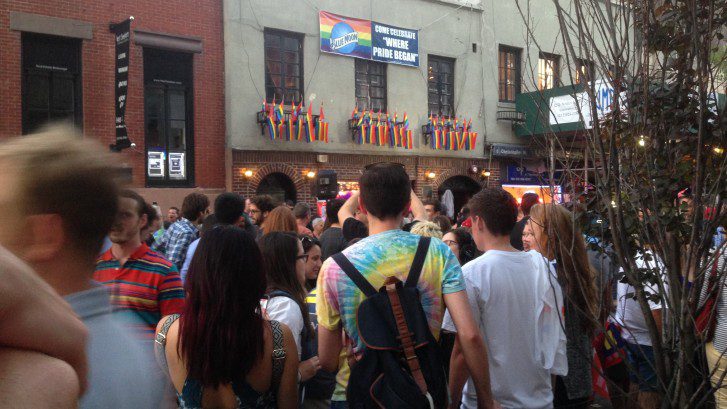 LGBTQ+ people have been enormously important in New York City’s history—especially its cultural history.  And New York City has been enormously important in LGBTQ+ history.  This is probably largely due to the fact that, although New York was terribly repressive about issues of gender and sexuality through its history, it was generally less so than most other parts of the USA, so New York City served as a gathering place for LGBTQ+ people from all around the country, and to a lesser extent the world.  And within New York City, there was one neighborhood known for relative freedom for LGBTQ+ people, and that was Greenwich Village, which was America’s first gayborhood, starting perhaps as early as the 1920s.

In fact, however, there are many.  In fact, in this post I will limit myself to the area of a few blocks around the Stonewall Inn.  In later posts, I will move further East and West in the Village, and also write specific posts about different parts of the LGBTQ+ community—about the Village’s lesbian history, its trans history, and so on. 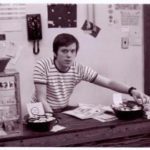 In fact, the street the Stonewall is on has LGBTQ+ history of its own:  in the 1970s, it was the Main St of gay America.  Within my memory, there was a constant crowd of gay men strolling (or cruising) up and down Christopher St 24 (or seemingly 24) hours a day, and the streets was lined with gay bars and gay sex shops.  Until 2009, a significant institution of the LGBTQ+ world was just two blocks East of the Stonewall at 15 Christopher St :  the Oscar Wilde Memorial Bookshop, the first gay bookstore in the world, founded in 1967.  The Oscar Wilde had great historic significance.  Today you can of course get books on LGBTQ+ themes from any bookstore, real-world or on-line, but in 1967 that wasn’t true.  And it was revolutionary to point out that Plato’s Symposium, Thomas Mann’s Death In Venice, and One Magazine all had something in common, and that the same reader could reasonably be interested in all 3 for similar reasons.  The bookshop’s founder, Craig Rodwell, was also important in the Stonewall riots, because it was he who kept the press (which did report on the riots, although not sympathetically) up to date, and in the first Pride march, which he in part proposed and organized. 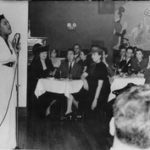 Another place with a lot of LGBTQ+ history is around the corner, at 1 Sheridan Square, now home to the Axis Theater Company. In 1938 the space became a bar called Café Society—the first integrated bar in New York City. Such places tended to also attract and tolerate a mixed audience in other senses, and Café Society, as one early review stated, was a hotspot for “long-haired men, short-haired women, and those not sure exactly what they are” —a pretty good way to say “LGBTQ+” for the 1940s.  There is a lot to tell about Café Society. Billie Holiday (whose bisexuality has only recently been acknowledged) made her name singing there for 2 years and premiered “Strange Fruit” there. Another singer in early years was Bayard Rustin, Martin Luther King’s confidant and the organizer of the 1963 March on Washington, who was also an accomplished tenor.

Café Society closed in 1950, but the theater’s gay history didn’t stop there. It was a gay dance club in the 1960s. And in the 70s and 80s it was the home of Charles Ludlam’s Ridiculous Theater Company. Ludlam was one of the most important drag artists in American history—one of the people who mainstreamed drag performance. Ludlam had one cross-over hit, The Mystery of Irma Vep, which premiered here, and it is also here that he gave Charles Busch, the leading drag artist in today’s theater, his first roles.

A third important spot is the stretch of Washington Street next to the Axis Theater Company.  No plaque marks 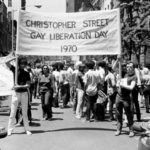 the spot, but this is the place where the marchers gathered for New York’s first Pride march, then called Christopher Street Liberation Day, on June 28 1970, the one year anniversary of the start of the Stonewall riots.  A police permit for the march was only issued at the last minute, and only a few hundred marchers gathered.  According to some participants, their main concern was that they might be attacked by the public as they marched.  Instead, the march gained steam as it went up 6th Avenue toward Central Park.  At its height, there were thousands of marchers, and it stretched 15 blocks (3/4 mile).  There was also a large march in Los Angeles that day, and small marches in San Francisco and Chicago.  But it was this huge New York march that showed both the participants and the public that there were not just a few isolated LGBTQ+ people:  they were a sizable group with a group identity and would, like any other American group, fight for their civil rights.  Indeed, one could say that as much as the Stonewall riots themselves, it was the march commemorating that represented the birth of the LGBTQ+ rights movement.