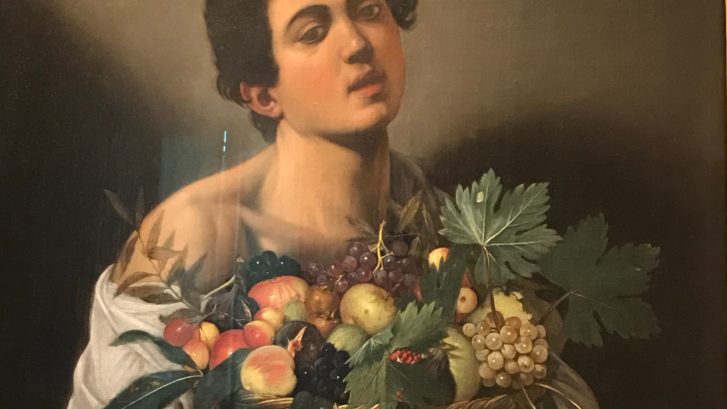 Gay artists have faced a daunting dilemma since the beginning of time: keeping their sexuality hidden or being out with their art and lives and, in doing so, risking rejection and even prosecution. This is why many gay artists, who couldn’t express themselves openly, were forced to live double lives.  They created mainstream work, which they showed openly, as well as homoerotic work, which they hid, circulated just among a circle of friends, or destroyed.

Most of the artists in question lived at a time before sexologists came up with the term homosexuality. Men of this era didn’t think that loving or having sex with other men was abnormal or put them into a sexual category, homosexuals. The assumption was that all men were heterosexual and wouldn’t care about seeing each other naked. When homosexuality was publicly acknowledged in the late 19th century, male nudes became taboo and suspect and artists had to come up with coded ways and double lives to express their homo-eroticism.

Caravaggio was able to produce his groundbreaking religious and homoerotic art thanks, in great part, to a patron who opened the doors to this double artistic life for him, Cardinal Del Monte. This cardinal offered Caravaggio room and board in his palace and got him his first public commission at a church in Rome, which made Caravaggio a star in the art world.  At the same time, Del Monte commissioned Caravaggio to paint private images of the street male youths that he knew personally.

Caravaggio’s creative life lasted less than two decades. In this brief period, he became the 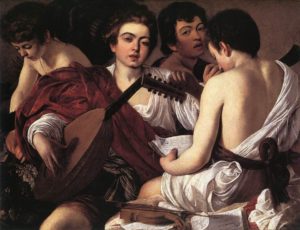 most modern of old masters. An example of his homoerotic work is The Musicians, which Caravaggio painted during one of Del Monte’s parties. Soon after, Caravaggio met the handsome Mario Minniti. He took him home to live with him and used him as a model for several paintings, including Boy with a basket of fruit (see above) and Bacchus. In Bacchus, commissioned by Del Monte, the model invites the viewer into the scene as his robe slips off. Caravaggio uses the myth of Bacchus as a façade to cover for the painting’s lasciviousness, but he brings to life Minniti’s naturalistic features in a hugely provocative manner. Del Monte shared these paintings privately with his circle of friends, art patrons who also commissioned similar homoerotic work form Caravaggio.

John Singer Sargent was an extremely private man. He gave no interviews and adidn’t write diaries or memoirs. He was Oscar Wilde’s neighbor and he lived under the shadow of Wilde’s trials, which established the emergence of homosexual identity, directly associated with artists, and the appearance of laws that criminalized gay activities. Sargent’s letters and papers were destroyed by his family, so his sexuality is hotly debated to this day. We know, however, that, being the preeminent portrait artist of high society, he couldn’t have been openly gay.

After Sargent’s death, dozens of intimate, sensual, voyeuristic, and openly homoerotic male nudes surfaced, many representing Sargent’s valet, Nicola D’Inverno. Sargent hired D’Inverno as a valet when he was a 19 year old boxer with a great physique. He worked for Sargent for 25 years.

In the period of the MFA mural, Sargent’s muse was a young African-American man, Thomas McKeller. In his murals, Sargent transformed him into classical gods, goddesses, 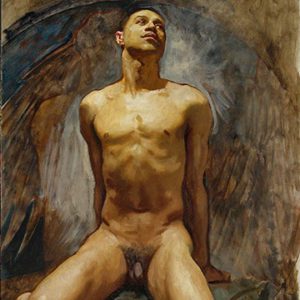 and allegorical figures. McKeller also posed for a striking, provocative, nude portrait, which he never exhibited, although it is one of the artist’s most poignant and beautiful paintings. This portrait, which is not related to any of the murals, remained in his studio until his death, and it was not well known until recently.

If you think that Andy Warhol’s life and career were a one-lane path of open, unabashed, homosexuality, think again.

Warhol moved to New York to work as a commercial illustrator in the early 50’s. He channeled his swishiness into elegant drawings of shoes for advertising campaigns, which earned him awards and opened social contacts. Just when Abstract Expressionism was taking the art world by storm, and artists like Jackson Pollock were creating bold, massive, abstract canvasses, Warhol rejected the predominant macho ideals with a public sissy image—a groundbreaking feat for this era, particularly for an ardent, practicing Catholic.

It was during these years that Warhol created over a thousand simple and whimsical ballpoint pen drawings with brazenly gay content.  In these drawings, he captured his lovers, nude male couples in rapturous embraces, and romantic images of beautiful boys—a stark contrast to the 50’s moral code. The assumption has been that Warhol’s career as a serious artist began in 1962, with his famous exhibition of soup cans. Instead, these depictions of desire are Warhol’s most transparent and personal work, showing an emotional vulnerability that you don’t see in his later machine-like work.

By the end of the 1950’s, Warhol wanted to be a ”real” artist. He discovered that being gay opened door to parties and window shop commissions, but not for galleries. After many rejections, he realized that an openly queer art would only be embraced by a gay ghetto, far from what a ferociously ambitious artist like him intended. This is when the new life of Andy Warhol began, starting with a change of image. After he failed to market himself as a

Any Warhol, after and before

gay artist, he fashioned an eccentric public figure, more asexual than queer. By this time, popular culture and mass marketing exploded. Warhol’s imagery moved from boys kissing boys, which have a very limited appeal, to soup cans, which were universally known and loved. Just like Warhol himself, his images of pop icons like Marilyn Monroe and Elvis Presley managed to convey a coded sexuality, depending on who was watching them.

If you want to know more about the double lives of these iconic artists and many more, all you need to do is sign up for my January 31 Zoom talk, The Double Lives of Iconic Gay Artists, from Caravaggio to Warhol.

First LGBT trail in a US museum!